Neon White is a speed-focused first-person action game. You play as White, an assassin from hell, and it’s your job to hunt down and eliminate the demons that hang around Heaven. You’ll face a handful of other Demon Slayers along the way, and if you manage to stand out, you can earn yourself a permanent place in the Promised Land.

Everything about Neon White screams originality. From gameplay to graphics, from music to art, Neon White is a one-of-a-kind experience. Luckily, it looks like Neon White has the substance to match its style, as multiple outlets have reserved the title for a Game of the Year nomination. If this one wasn’t already on your radar, it definitely should be now!

To learn more about this Switch console exclusive, we had the amazing opportunity to chat with Ben Esposito, the indie developer behind Neon White. Esposito shared a ton of information about Neon White’s birth, as well as a few happy accidents and surprises along the way. You can see our full conversation with the man himself below. 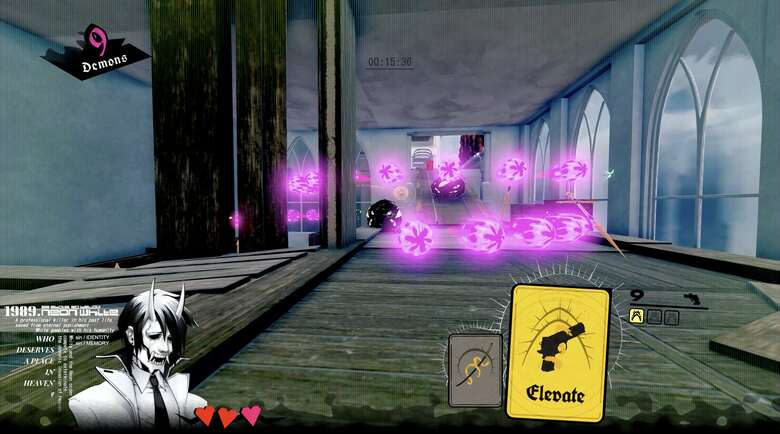 LARP: For those who don’t know, can you quickly explain what Neon White is?

Ben Esposito: Neon White is a single-player first-person speedrun game where you can sacrifice your weapons for parkour moves. You play as White, an assassin who was brought to Heaven to compete with other Demon Slayers for a chance to live in Heaven.

LARP: The look of Neon White is both unique and beautiful. How did the team arrive at this visual approach?

There are enough first-person shooters in hell! We thought it would be fun to do the opposite. The bright, clean, and colorful aesthetic is not only striking, but also makes the game playable at very high speeds. Visual clarity was really important to us, so the limited color palette is meant to emphasize gameplay.

LARP: While speedrunners take on any game and challenge, Neon White seems designed for speedrunning from the ground up. Was it still a goal the team had in mind?

Ben Esposito: The concept of the speedrun was a bit of a coincidence! When prototyping the idea of ​​a card-based shooter, we tried to get rid of the deck concept and instead had enemies drop the cards you’re playing with. We designed a few levels this way and found it super fun to compete for time…so much so that we decided to build an entire game around it. We hope to meet the needs of seasoned speedrunners, but also make it accessible to players who might be interested but haven’t tried it. 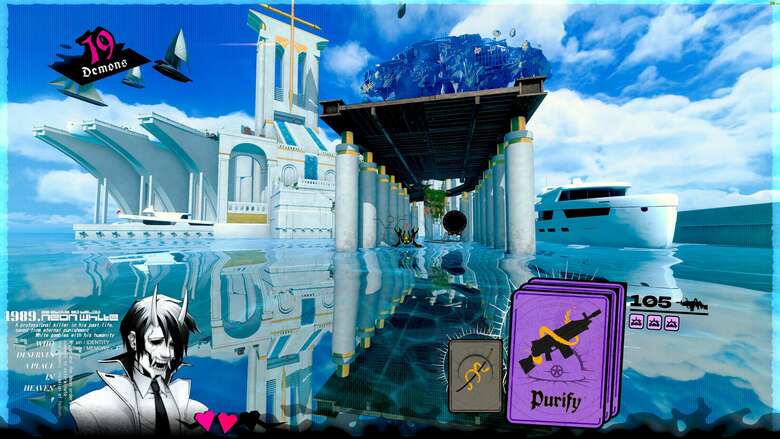 LARP: How does Neon White fit in with both die-hard speedrunners and those just getting to grips with the idea?

Ben Esposito: For players new to the idea of ​​speedrunning, we’ve structured the game specifically around replaying and discovering new ways to view levels. In the beginning you just try to kill all the demons and get to the end of the level. Once you do this, you unlock a collectible gift that requires you to use the map resources available in the level in a new way. Then, to get a gold medal, you will need to use these cards effectively by discarding them. Lastly, you won’t be able to “Ace” a level until you find a shortcut…and if you’re having trouble with that, the game has a built-in hint system that gives you an idea of the place to look, though he tries not to give the answer!

For players more committed to speedrunning, there are a whole bunch of hidden mechanics and behaviors for them to discover that the game never forces you to do. There are unlockable modes called Level Rushes that allow you to play through the game in sequence without the story. The one that excites me the most is Hell Rush, which is a permanent race through the game where your health doesn’t replenish between levels.

LARP: Neon White puts you in the role of a hand-picked assassin in Hell to compete with other Demon Slayers for a chance to live permanently in Heaven. How will players be able to interact with the story and advance it throughout the game?

Ben Esposito: The story is presented in a style inspired by a visual novel. The game is divided into twelve “missions” which are sets of levels that have story beats at the beginning and end. Between missions, players have the chance to hang out at Central Heaven, the hub where they can replay previous levels to collect gifts. They can then gift the gifts to hub characters to unlock side content like individual conversations, memories of the past, and side quest levels that have unique rules depending on the quest giver.

Only by interacting with the other characters and earning White’s memories will players be able to unlock the “true” ending of the game.

LARP: The voice behind Neon White is star-studded, with anime legend Steve Blum leading the pack. What was the process of landing such a stellar group of actors?

Part of our team comes from the animation industry rather than games, so ultimately when casting we weren’t trying to get the best known actors, just the best character performances. strong and most interesting. We are so happy with all of the actor’s performances in the game. 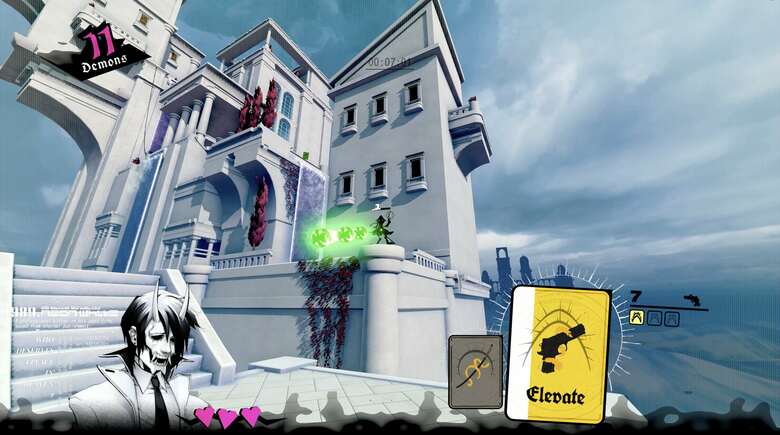 LARP: Neon White’s ‘Soul Cards’ seem like the perfect mechanic for speedrunning. How many ways can they change the gameplay?

Ben Esposito: The game has 6 main maps (and one that is a spoiler!). Each card behaves differently like a weapon in the traditional FPS fashion (pistol, shotgun, machine gun, etc.), and each has a unique discard ability that moves you and deals damage to enemies.

The design of Soul Cards isn’t to give players more freedom, it’s to introduce interesting constraints and compromises. At first you’ll worry about not having enough ammo to get through the levels in one piece, but once you get into the game you’ll find that you have way more than you need – maybe. be should you spend those cards instead of saving them!

LARP: Neon White is a console exclusive for Switch. What prompted the team to target Switch as the console of choice for this experience?

Ben Esposito: We thought the mood was right! But seriously, the levels in this game range from minutes to seconds. It’s fun to play the game in small chunks, and we really thought handheld mode on Switch was the perfect fit for those kinds of sessions. It’s also nice to play around with the gyroscope controls.

LARP: The Switch isn’t exactly known as a powerhouse, but Neon White fires at 60 frames per second. How on earth did the team manage to achieve this goal, and how important was it?

Ben Esposito: Neon White is a game where milliseconds count, so it was important for us to hit 60fps on Switch simply because it makes the controls much more responsive, especially when playing with a gyroscope (which is recommended !)

It was a bigger undertaking than you think! This wouldn’t have been possible without working directly with Unity to port the game. They came up with loads of tricks to reduce dynamic shadows, ambient occlusion, anti-aliasing, and at some levels even plane reflections under the bar of 60 frames per second. We had to rework 100% of our shaders and environment materials to hit the budget, so everything you see in the game has been redone with performance in mind.

LARP: What is the team most looking forward to seeing from the players when Neon White is released?

Ben Esposito: We can’t wait to see what shortcuts and optimizations players will find. When we released a brief demo on PC, we were blown away by some of the tricks that came out of it, most of which we had absolutely no idea. Even though we’ve created specific shortcuts in each level, that doesn’t mean it’s the fastest way to beat it. We will monitor your speedruns! 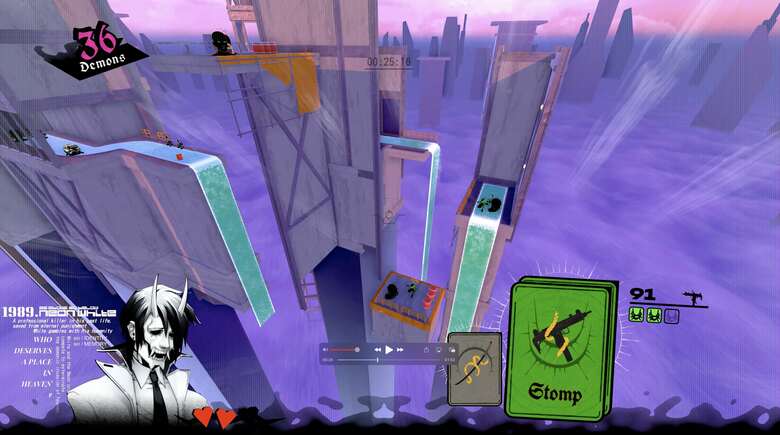 Many thanks to Ben Esposito for taking the time out of his busy schedule to answer our questions, and to the PR team who helped put this together. If you want to know more about Ben Esposito, you can follow him on Twitter here.

Neon White is available on Switch now. The game is priced at $25 and takes up 4.6 GB of space. You can get a full gameplay breakdown via Official Nintendo eShop listing.

Bush Talk and Hunt: Naturalists share their knowledge of the Montana Creek Conservation Property on a weekend hike

Hikers, naturalists, and mosquitoes alike came together to stroll through blueberry-filled, knee-high bushes while experiencing some of Juneau’s wet meadows. Two Discovery Southeast naturalists, Richard Carstensen and Steve Merli, led a group of about 30 adults of all ages—clad in raincoats, Xtratuf boots, and hiking poles—through a few hours of hiking through high brush and […]

What is Omegle? | Everything you need to know about this chat platform

As parents, we want to expose our children to a variety of people, places, and experiences. It is these interactions that help children consolidate their values ​​and motivations. Of course, there are many ways to meet new people, like playing sports, joining a club, and virtual hangouts like cooperative computer programs like alternate reality games. […]

Chat with a professional account on WhatsApp? Here’s what to keep in mind