Between them, Kit Ellis and Krysta Yang spent nearly 30 years at Nintendo. The duo may have handled PR for the Big N behind the scenes, but they became much better known to fans as hosts of Nintendo Minute, a weekly show on all things Nintendo. From game previews to shopping challenges and more, Kit and Krysta become on-screen Nintendo personalities that fans everywhere love.

While Kit and Krysta were both an integral part of Nintendo internally and publicly, in early 2022 the duo revealed they were parting ways with the company. It’s not exactly the best news for Nintendo fans to start the year, but we found out shortly after that Kit and Krysta were going continue to work together on their own podcast and Patreon projects. Not having the pair at Nintendo still seems a bit strange, but it’s just as wonderful to see them sticking together for personal projects.

Want to know more about Kit and Krysta’s life now that they’re no longer part of Nintendo? We had the chance to sit down with the team virtually to discuss anything and everything that came to mind! You can read our interview in full below. 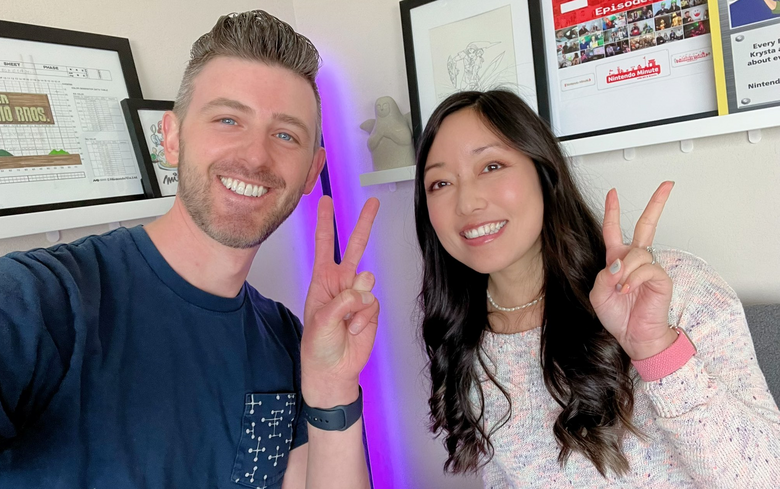 LARP: First of all, how are you guys?! You’ve been through a whirlwind these past few months!

K&K: We are doing very good ! It’s been a really crazy six months, but we’re so happy to be back together and creating the content we love for our amazing community. .

LARP: How did it feel to see yourself being the subject of so many stories after your departure from Nintendo?

K&K: First of all, we were really touched by all the nice things people had to say about us and about Nintendo Minute. We knew once the series ended and once we left Nintendo there would be some kind of fan backlash, but we were definitely unprepared for the outpouring of love and support we received. . The overwhelming response to this news played a big part in our decision to continue creating content independently.

LARP: Was there anything that came up in this cover that surprised you?

K&K: We couldn’t believe how many fans contacted us to say they grew up with Nintendo Minute or that the series helped them through a difficult time in their lives. It’s so much more than we could have asked to accomplish when we started. We are honored that the content we create can play such a positive role in anyone’s life. 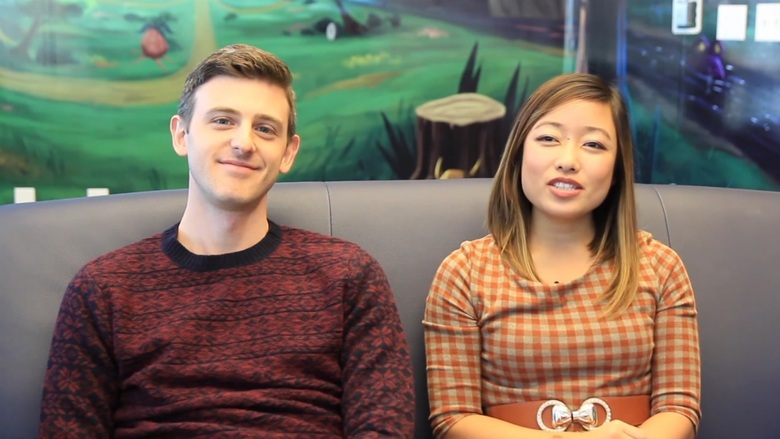 Nintendo Minute at its peak

LARP: For those who don’t know, can you explain your decision to leave Nintendo?

K&K: Nintendo of America’s headquarters are in Redmond, Washington, but we were located in a smaller office in Redwood City, California. We learned last September that this office would be closing in 2022. To Nintendo’s credit, the company has done everything possible to help those interested in moving up north, but for various reasons we have decided not to. To do. We’ll cover that in detail in the first episode of the Kit & Krysta podcast if anyone’s interested in hearing the full story.

LARP: Was it difficult for you to decide to part ways with Nintendo?

K&K: It was both hard and easy, if that makes sense. On the one hand, Nintendo is a company that we love with all our hearts and have worked with for almost 30 years between us. On the other hand, relocation is a lot to ask of a business, and the decision gave us the opportunity to assess what we really wanted to prioritize going forward.

LARP: Following our last question, how long in advance did you know you wanted to work together after leaving Nintendo?

K&K: We both immediately talked about wanting to continue creating content together, but we needed a little nudge from friends and fellow creators to say that it would be the right move. We owe a lot to these people who gave us their advice, their expertise and ultimately the courage to take the step towards independent content creation. ! 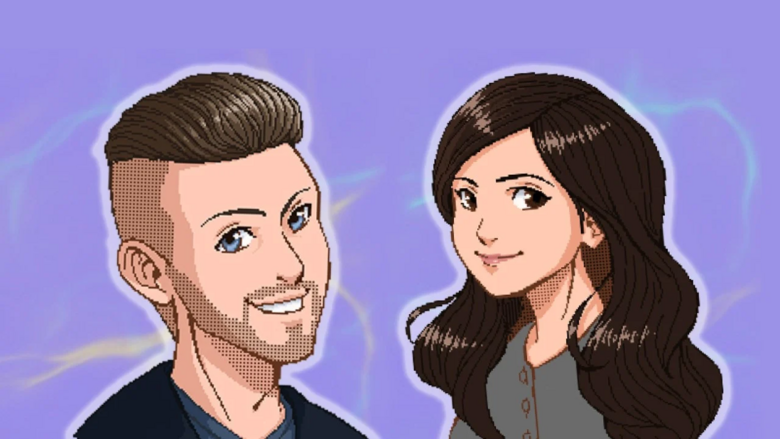 LARP: Did the relationship you built through Nintendo Minute play a big role in your post-Nintendo projects?

K&K: Absolutely – we’ve worked together for 13 years but above all we are very close friends. We’ve had some really fun jobs, but making the Nintendo Minute has been the most fun we’ve had during our time at Nintendo.

LARP: Do you have a favorite Nintendo Minute moment, or even just a moment from your time at Nintendo in general?

K&K: The launch of the Nintendo Switch was a special moment for the company and also for Nintendo Minute. Going from challenges from Wii U to Switch was like night and day, and it was a time when our show really took off. It was special for us to be a part of this moment and create content around this amazing system and games at a time when there was so much passion and excitement in the community.

LARP: How do you think working at Nintendo changed the way you think about games?

K&K: Nintendo definitely prides itself on thinking differently and it shows in the games and hardware it releases. Especially now, we can see how Nintendo games try to introduce new ideas, whether it’s a new intellectual property or a long-running franchise. Above all, we have so much respect for the people who make the games. They are so passionate and creative, and they put their all into their creations. 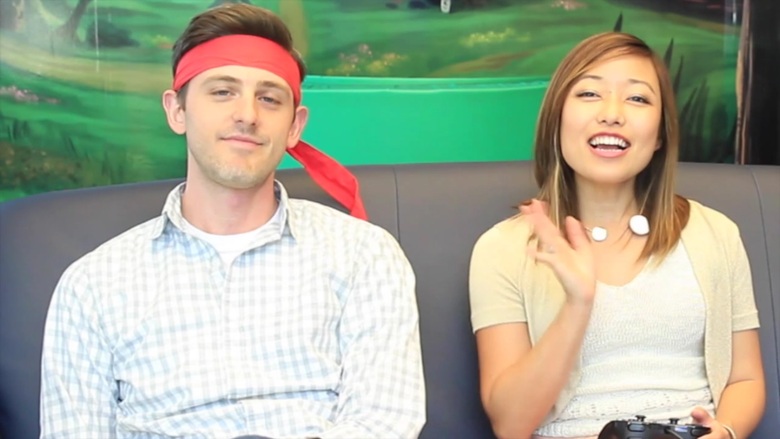 Kit has her game face

LARP: Is it exciting to expand the range of games and platforms you can discuss publicly?

K&K: Yes! We’ve always played games on as many platforms as possible, so it’s very refreshing to be able to talk about all the things we’re enjoying right now. Nintendo will always be where our hearts are though.

LARP: Speaking of which, what games are you currently playing (all platforms, but Switch definitely included!)

K&K: The last few months have been nothing short of amazing for new releases. We both played and completed Pokemon Legends Arceus before moving on to Horizon Forbidden West and Elden Ring. We’re also very excited for Kirby and the Forgotten Land and the new tracks in Mario Kart 8 Deluxe.

LARP: Do you see yourself creating more game-based content outside of Nintendo’s scope, whether it’s a third party or a different platform?

K&K: Just like with Nintendo Minute, we will always gravitate to what interests us most and focus on that. Most of the time these will be games on Nintendo platforms, but now we have the freedom to expand even more and envision more. 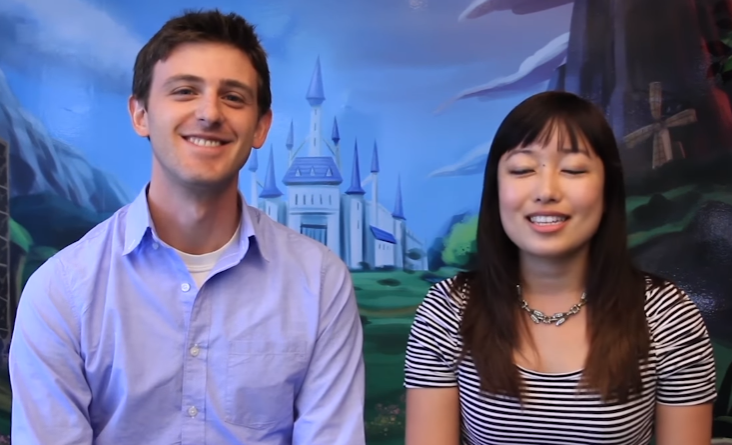 LARP: What freed you the most when you left Nintendo?

K&K: It was wonderful to have complete freedom to interact with the community. We had quite a bit of freedom with Nintendo Minute, but there were safeguards that prevented us from going further. Fans are what make it all possible for us, so we love being able to fully engage with them and reflect their views in the content we create.

LARP: How different is your schedule from when you worked at Nintendo?

K&K: The timing was really the biggest difference between then and now. In any large company, you’re going to spend a lot of time in meetings and dealing with emails. We still have them now of course, but they represent less of our day. It’s so rewarding to be so hands-on with all the content we create.

LARP: Should we expect to see you appearing in other parts of the games industry, or are you keeping it to two for now?

K&K: It is impossible to predict the future, but we want to continue creating content together for as long as possible. We work well together creatively, we push each other to do our best and we don’t get (too) angry. We feel extremely lucky to have this opportunity. 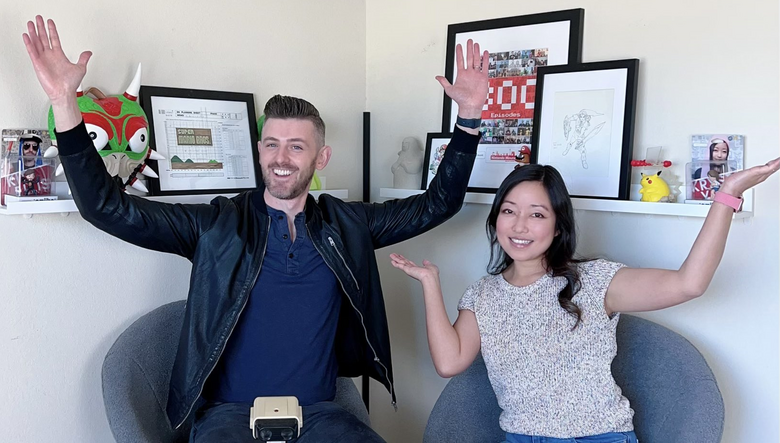 Back and better than ever!

Huge thanks to Kit and Krysta for sharing some of their time with us. Once again, you can find information about their podcast and Patreon content via this link.

Finally, on a personal note, I would like to sincerely thank Kit and Krysta. Both of them, from the first day I attended a Nintendo event, were nothing but extremely kind, helpful and generous with their time. They always made me feel like what I was doing/doing was important and in general they were great people to hang out with. The time and interactions I had with both of them were extremely valuable, and I will forever cherish those moments.

Facebook is hosting a slimmed down version of its annual F8 Refresh developer conference. At the conference, the company announced new features for its WhatsApp Business API that will allow businesses to get started faster and people to easily chat with those businesses. Creating a business account on WhatsApp is faster The company says it […]

Your WhatsApp chats are end-to-end encrypted, but here we list top 5 WhatsApp tricks that will get rid of your dangerous conversations. On WhatsApp, everyone wants their conversations to remain secret! WhatsApp has an end-to-end encryption feature, which keeps hackers away. And the best part is that it is enabled by default and no matter […]